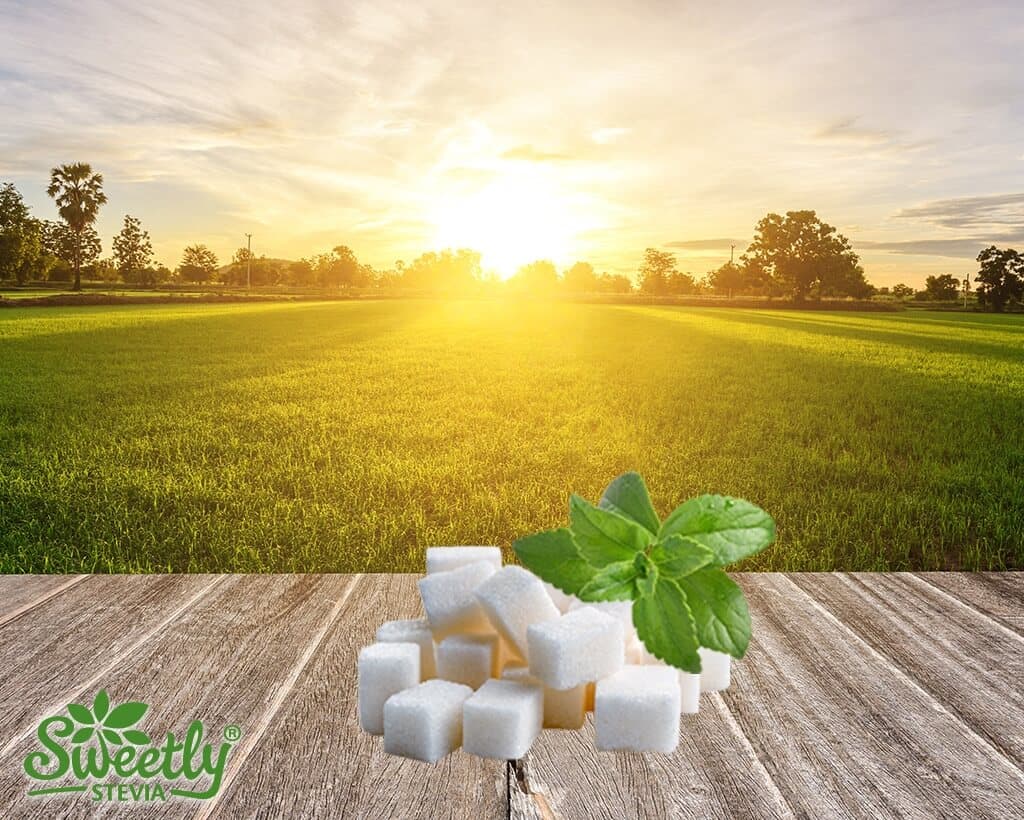 Stevia is unique in the sense that it is famous for what it does NOT do. It doesn't add calories. It doesn't convert to fat. It doesn't raise insulin levels. Sweetly Stevia doesn't contain sugar alcohols or any harmful chemicals. With all of these "does nots", switching to Sweetly Stevia is a no brainer! Unlike other substitutes for sugar, stevia is derived from a plant. The stevia plant, specifically Stevia Rebaudiana, is native to Brazil and Paraguay. The people have been using the stevia plant to naturally sweeten their foods for hundreds of years.

Stevia is a natural sugar substitute that is non-caloric and has zero carbohydrates. There is an increase in interest in its use to help people with diabetes manage their blood sugar levels. We covered how stevia can be beneficial to diabetics in this article. Stevia is derived from a plant called the Stevia Rebaudiana, native to North and South America. The sweet part of the plant is called steviol glycosides, which can be up to 400x sweeter than sugar.

Although steviol glycosides are so sweet, they can leave a bitter aftertaste, so most manufacturer's products contain other ingredients. Here at Sweetly Stevia, we use a patented water extraction process, making our stevia product pure and free of harmful chemicals and bitter aftertaste. We mix our glycosides with organic erythritol to bring you ultimately the closest tasting stevia product to sugar. Seriously, 75% of people say Sweetly Stevia tastes just like sugar!

What are steviol glycosides? What makes stevia so sweet?

The sweet part of the stevia plant is found on its leaves. The crystal-white transparent substance that sits on top of the leaves is actually produced by the plant as a natural protectant against the sun! Here at Sweetly Stevia, we use a patented water extraction process to extract these sweet crystals from the plant and isolate the steviol glycosides. These steviol glycosides can actually be 400x sweeter than sugar! Your tongue would literally burn if you were to taste pure steviol glycosides without them being mixed with a natural filler. Because of how naturally sweet stevia is, it typically requires far less land and much less water to grow, meanwhile delivering the same amount of sweetness as other not-so-natural sweeteners.

Stevia extract, known as steviol glycosides, is Generally Recognized as Safe (GRAS) for use in foods as a sugar substitute by the FDA. Substances that have been considered GRAS by the FDA have been determined to be safe through scientific tests and reviews, expert consensus, and widespread use without negative effects. In other words, stevia is safe to consume in moderation. Go stevia!

What can I use stevia for?

Aside from being used in your coffee or tea every morning, you can also bake and cook with stevia! We have some delicious recipes made with Sweetly Stevia that are sure to please any crowd. Additionally, you can substitute stevia for sugar in any recipe you find!

Stevia can be used as a sugar substitute in keto diets, low-carb diets, vegan and vegetarian diets, and paleo diets. We have some delicious recipes for you to try, listed here!

Besides being used as a sugar substitute in food and beverages, stevia can also be used in skincare products! Stevia has many skin benefits and can be used in face masks, lotions, sugar [stevia] scrubs, acne treatments, and much more!

What are the benefits of stevia?

There are so many potential health benefits of stevia. Stevia is considered to be non-caloric, meaning that it has zero calories. This nonexistent calorie count makes stevia a very healthy sugar alternative for people with diabetes and those who are managing their weight or are on a weight-loss journey.

Research has shown that stevia sweeteners don't contribute any calories or carbs to the diet, and have no effect on blood glucose and insulin. This research has been helpful for those with diabetes and allows them to eat a wider variety of foods while using stevia as a substitute for sugar. Not only is stevia a healthy choice for people with diabetes, but also for those who are watching their weight. Did you know that the intake of sugars has been shown to contribute an average of 16 percent of the total calories in the American diet? This has been linked to weight gain and reduced control of blood glucose levels. Using stevia as a sugar substitute in your favorite meals and beverages will allow you to cut down on harmful sugars without sacrificing taste!

Stevia contains sterols and antioxidant compounds, including kaempferol. Sterols are steroid alcohols and are an important class of organic molecules that occur naturally in plants. They are linked to reduced LDL cholesterol (the bad cholesterol) levels in our bodies. Kaempferol is a strong antioxidant that helps to prevent oxidative damage to our cells, lipids, and DNA. Studies have also confirmed that kaempferol acts as a chemopreventive agent, which means that it inhibits the formation of cancer cells. Which is great news for pancreatic cancer patients those at risk of being diagnosed with pancreatic cancer. One study, in particular, has shown that kaempferol can reduce the risk of pancreatic cancer by 23 percent! That's a big deal!

Not only does stevia have plenty of health benefits, but it is also very beneficial to your skin! Studies have shown that stevia prevents wrinkles, halts the signs of aging, reduces acne, fights dermatitis or eczema, and revitalizes the skin! The intake of normal table sugar causes glycation, in which sugar binds to the collagen in our skin and makes it become stiff and brittle. By switching to stevia, you are not only stopping the process of glycation and keeping the collagen from breaking, but it's also rich in antioxidants that protect our cells from free radicals. Inflammation of the sebaceous glands causes the formation of acne on our skin, thankfully the leaves of stevia plants possess antiseptic and antibacterial properties and can be applied to the skin to reduce the presence of acne and can help prevent it from coming back.