Stevia On The Keto Diet 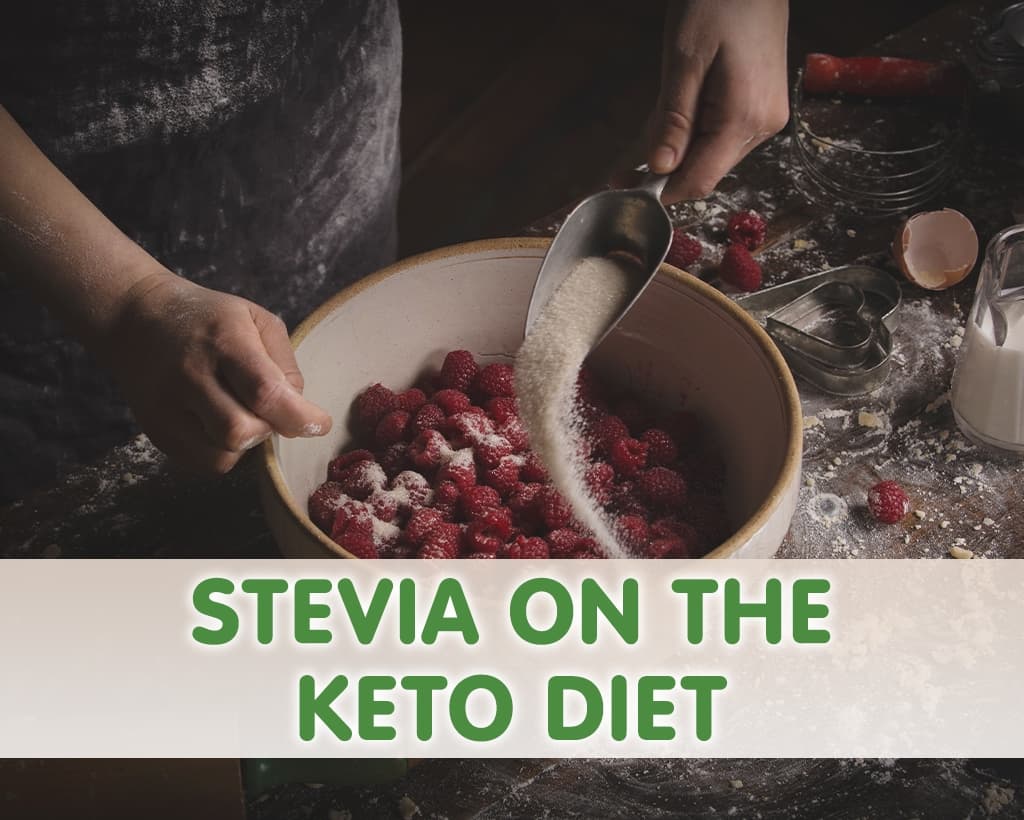 Stevia On The Keto Diet

The "keto" diet, or ketogenic diet, is more than just a trend that won't seem to go away. It's actually a highly effective method of shifting the metabolism into "fat burning mode". Overweight individuals who have struggled to lose body fat and keep it off have found remarkable success on the ketogenic diet.

We can't imagine why you might not have heard of this fat burning diet, but in case you haven't, this is how it works. The aim of the diet is to force the body into a state of "ketosis", otherwise known as "fat burning mode", and the fastest way to do this is by eating a diet that is very high in healthy fats and extremely low in carbohydrates. The quantity of protein eaten is considered adequate. 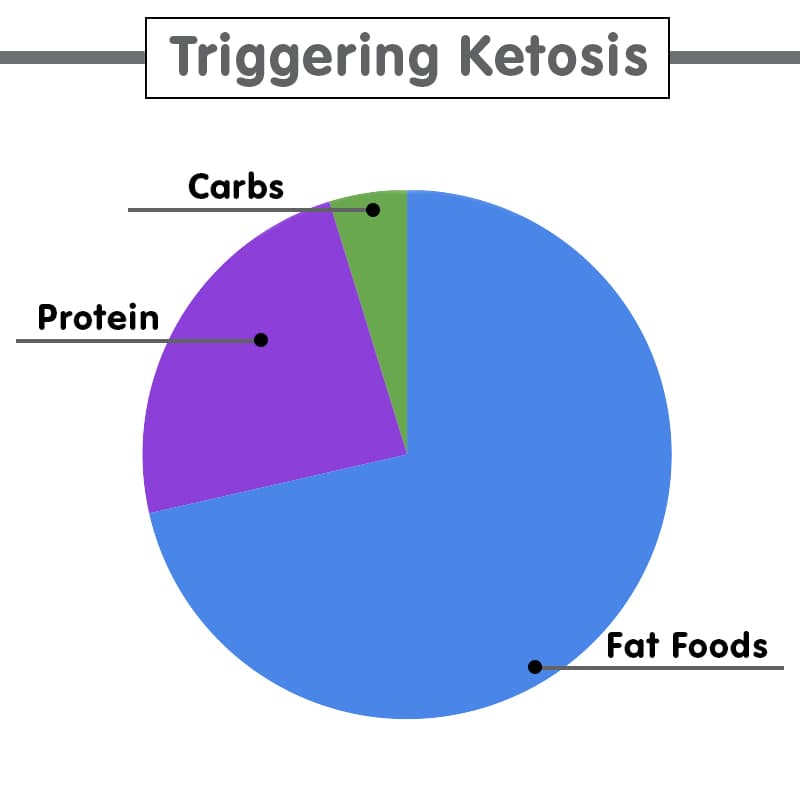 Ordinarily, the human body burns carbohydrates. It's actually our preferred fuel source. Carbs range from high-glycemic table sugar--our brains love that--to low-glycemic, starchy root vegetables like sweet potatoes. Our muscles fill up with glycogen from these carb sources, and our livers fill up with 30-40 grams of fructose, and both are used to power our brains and bodies throughout the day.

When a person is burning carbohydrates for energy, however, they are not burning the alternative source of energy that they also store in their body--fat. 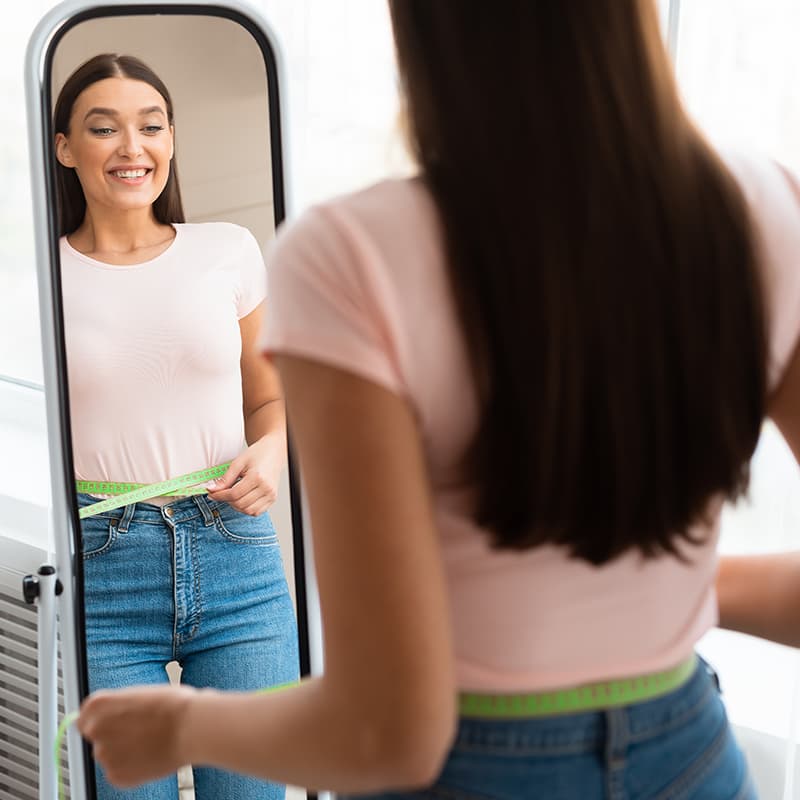 In order to tap into those fat reserves to fuel your brain, muscles, and organ functions, you must restrict or eliminate the amount of carbs you eat, therefore reducing the carbohydrate energy that's stored in the body. Doing this triggers a "switch" in metabolism and the body then uses fat as its primary fuel source. Breaking down bodily fat to burn as fuel is called ketosis and the actual fuel source--the fat molecules that are burned--are called ketones.

Ketosis is a normal and necessary physiological process. In fact, we all go into ketosis, dipping in and out of it, in certain cycles. If you've ever slept longer than 10 hours, you've definitely dipped into ketosis and your body has burned fat to keep you alive. If humans weren't capable of this process, most of us would be dead before breakfast, or before we reach the top of a mountain, or around the second day of a major famine… You get the idea…

In order to trigger ketosis, the macros of a person's diet should have about 75% fat, 20% protein, and less than 5% carbs, and those carbs should really come from low-glycemic vegetables. What does 5% amount to? Roughly 30 to 50 grams of carbs per day. That's not a lot of volume if you like eating rice, but it could be a lot if you like spinach salad. 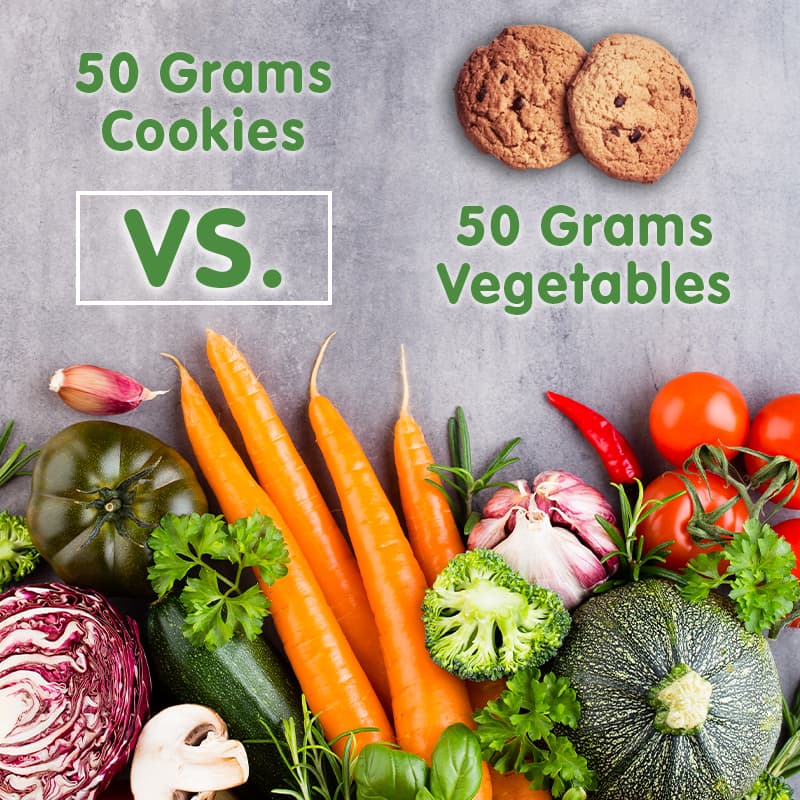 If you have a sweet tooth, however, even 50 grams of carbs is nothing--we're talking one single scoop of ice cream, one fork-full of birthday cake, a mere two small-sized cookies… Technically, you're really supposed to stay away from all of that when you're on the keto diet… but feel free to eat all the butter you want… Yum?

What else can you eat on the keto diet? Well, anything that doesn't cause your body to store dietary glucose, fructose, and galactose from monosaccharides, disaccharides, oligosaccharides, and polysaccharides as energy. In other words, you can have zero-calorie stuff. What kinds of calorie-free stuff? All kinds! And no, we aren't talking about the rewarding treat of eating ice cubes…

We're talking about both natural and artificial sweeteners that are calorie-free and do not cause a responding insulin spike when consumed. There really are sweeteners that are zero calorie, that do not contain carbs, and that you can enjoy while you maintain your ketogenic diet and aim to stay in ketosis!

But finding the right one can be tricky because some so-called calorie-free sweeteners are manufactured with "fillers" that can add carbohydrate calories, unfortunately. Others, especially the artificial ones, can cause digestive problems like bloating, gas, and negative alterations to a person's gut biome--the "good bacteria" in the intestines that support proper digestion. Sugar alcohols aren't too much better. The jury is still out on how these "-ol ending" sweeteners might affect digestion, metabolism, and the gut biome. The biggest names on the "-ol ending" list are erythritol, xylitol, and mannitol. 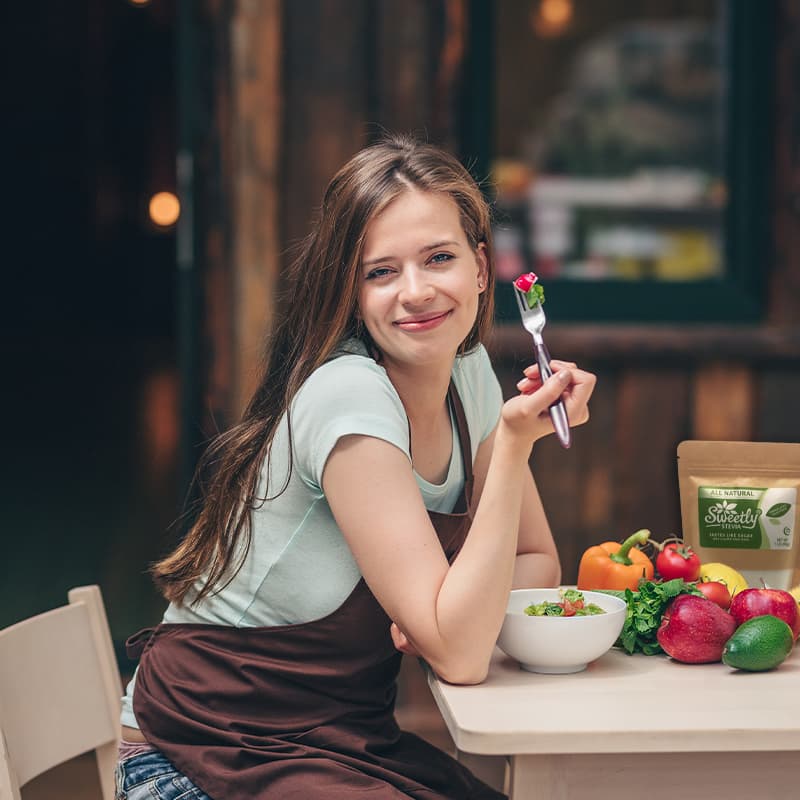 Before we take a look at how stevia, specifically, can contribute to a ketogenic diet, let's first address some good news. Once you adjust to eating a low carbohydrate diet, you'll probably find that you crave sugar and sweets less and less. For some people, sugar cravings go away entirely. This is the result of burning ketones as a fuel source as well as simply cutting carbs from the diet. The body that burns ketones likes doing so and because of this, the brain sends almost no hormonal cues to get you to reach for the sweets. Awesome, right?

It is. But getting there can be quite a journey. If willpower wasn't an issue and you abruptly stopped eating carbohydrates, it would take you approximately 2 - 4 days to get into full-blown ketosis and burn ketones for energy instead of glucose. How do we know this? The fastest method of cutting carbs out of the diet 100% in order to get into ketosis is by literally fasting, i.e. to stop eating altogether. In this instance, a person will definitely be burning ketones by the 96-hour mark.

We don't recommend not eating just to get into ketosis. Fasting is extreme and no one should attempt it without first consulting their doctor. But you get our point, which means you'll probably agree with our next point…

Who the heck has willpower? We can't choke down nothing but butter, olive oil, meat, and spinach for four straight days!

Factoring in human psychology and the fact that no one is a masochist, it's reasonable to accept that getting into ketosis will be a process. You will have sugar cravings. You will want to eat sweet things. This will be a journey, should you choose to embark on it. Think of it as a marathon and not a sprint. Even if it takes you weeks to see a dark color when you pee on those ketone strips, you'll get there. 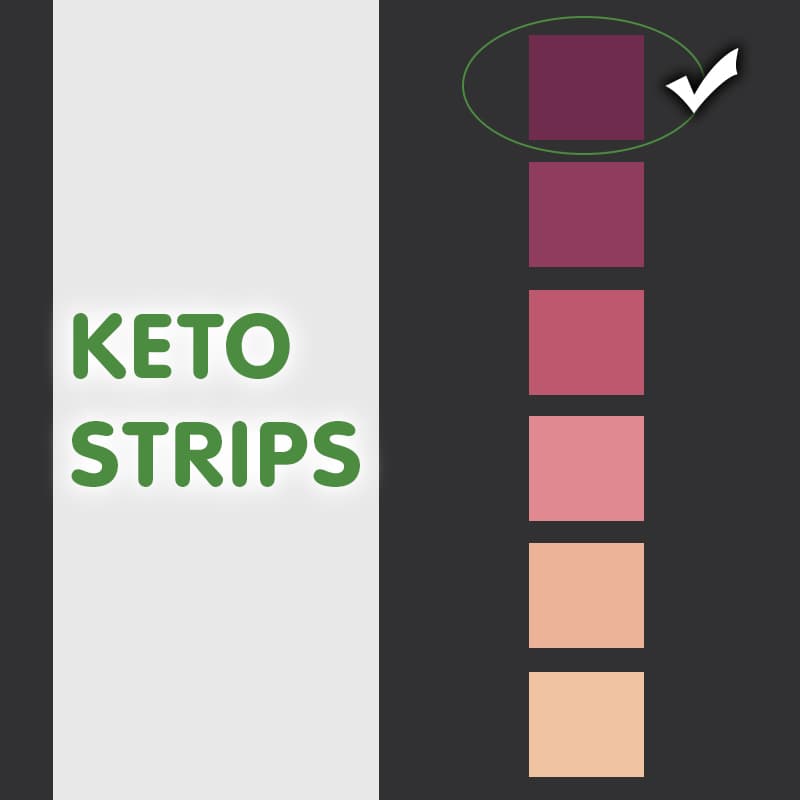 What are the best low-carb sweeteners to try while you're managing your keto diet? You'll really want to stick to the zero-calorie options that don't have "fillers". The reason some companies put "fillers" in their sweeteners is for cooking and baking purposes--so that one cup of their sweetener, for example, is equivalent to a cup of table sugar. Fillers contain trace amounts of carbohydrates that can really add up, as we mentioned, so be sure to read labels and avoid these.

The zero-calorie options to choose from boil down to stevia, monk fruit, and erythritol.

If you're interested in reading about a full comparison between sweeteners that includes an assessment of monk fruit, we highly recommend you check out our article Which All-Natural Sweetener Is Best For You?

Monk fruit, by name, is all natural and it really shouldn't have carbs or calories, but the health food store reality can be quite different. Like other calorie-free sweeteners with fillers, monk fruit can come with other sweeteners added in to "fill out" the portions. When it comes to monk fruit, the reason companies do this is because the extract is so radically sweet that it's difficult to measure out the correct--teeny tiny--portion. By adding fillers, a person can serve themselves a full teaspoon, just as they're used to with table sugar, without making their tea way too sweet. But these fillers can contain inulin, which has carb calories. Or worse, they can contain dextrose and maltodextrin--two additives that could cause digestive upset.

The next zero-calorie sweetener truly has no calories. We're talking about erythritol. If you're saying to yourself, hey, that's a sugar alcohol! You're right, which is why you might want to pass on this one. Erythritol is actually found in fruits, vegetables, and fermented foods, but it's not quite as innocent as it seems. While this sugar alcohol is reported to not affect blood glucose, most people can only tolerate 1 gram per 2.5 lbs of body weight. Anything more than this has been shown to cause stomach discomfort. Our thought is that satisfying a sweet tooth shouldn't cause a stomach ache, which is why we say "no thanks" to erythritol!

But what about stevia, the zero-calorie, all-natural sweetener that's derived from the herb, stevia glycosides? This sweetener does not contain calories and therefore doesn't have any carbohydrates, so it's keto-friendly. The extraction process used to isolate the sweetness from the herb can vary, but companies that use "water extraction" really do offer a quality end-product. Psst, Sweetly Stevia only uses water extraction and never processes its leaves with alcohols!

If anything, the main thing you'll need to watch out for when using stevia to sweeten your teas, coffee, cooking, and baking is the fact that it's 200 - 300 times sweeter than regular table sugar.

You'll also want to read labels. There are some less reputable companies out there that pack dextrose and maltodextrin in their stevia, especially their powdered stevia products. As we mentioned earlier, these sweeteners can cause digestive upset. But even worse than that, dextrose and maltodextrin are known to raise blood sugar. Culprits like these are often the reason a person can't seem to get into ketosis even when it appears their diet is completely ketogenic. 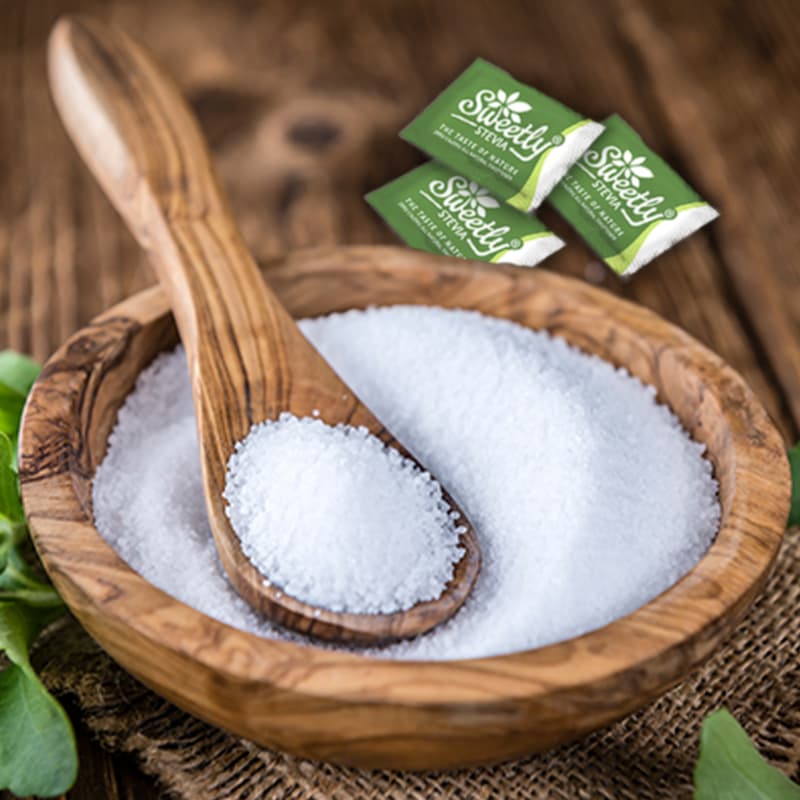 By far, stevia is the best option if you're looking to satisfy a sweet craving while sticking to your ketogenic diet, but try not to go overboard, and trust the process of shifting towards burning ketones exclusively. If your body wants sweets less and less, listen to it and try not to let that little voice in the back of your mind--you know, the one that's responsible for clinging to old habits--confuse you. Sooner or later, you'll be in ketosis and burning ketones like a locomotive.

There are other sweets that you'll want to be on the lookout for so that you can avoid them. Though "natural", these sweet drinks and foods will kick you out of fat-burning mode and stall your weight loss efforts because they're full of sugary carbohydrates. To stay in ketosis, avoid the following:

If you're ready to see what the sweetener stevia can do to support your ketogenic diet, be sure to check out the delicious keto recipes we've compiled on the Sweetly Stevia Recipe tab of this site. A few of our personal favorites are Keto Vanilla Cupcakes with Buttercream Frosting and Homemade Peanut Butter. And as always, be sure to get your stevia from Sweetly!